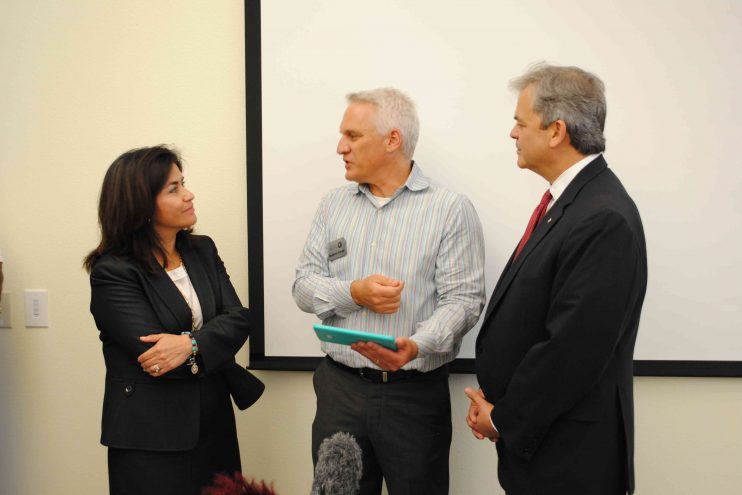 U.S. Department of Housing and Urban Development (HUD) Principal Deputy Assistant Secretary Lourdes Castro Ramirez today  highlighted the HACA and the City of Austin’s designation as a peer mentor to 28 communities participating in the ConnectHome initiative to extend affordable broadband access to families living in HUD-assisted housing. ConnectHome was recently unveiled by HUD Secretary Julián Castro and the Obama Administration. Work locally will be led by Austin Pathways.

“It is so important that every child be given the same opportunities to build a brighter future and achieve their dreams,” Castro Ramirez said. “That’s why just two weeks ago, the Obama Administration launched ConnectHome to provide more students a greater chance to pursue their dreams and aspirations. Together with Austin’s Unlocking the Connection and other partnerships across the country, through ConnectHome and the City of Austin’s leadership, we can work together to bridge the digital divide for all Americans.”

Working with the City of Austin, Google Fiber and other partners, HACA has developed a first-in-the-nation approach to helping low-income public housing residents access basic broadband, digital literacy training, devices, and other essential programs and services through the Internet. Google Fiber is now live at Manchaca Village, and Meadowbrook and Shadowbend apartments are currently being wired for basic broadband service.

“HACA’s Unlocking the Connection has broken new ground in addressing many of the barriers public housing residents face in getting online,” said Parisa Fatehi-Weeks, Community Impact Manager, Google Fiber. “It’s an exciting initiative to be a part of, especially as we begin installing our first public housing residents in Austin. We’ll continue working closely with HACA, Austin Free-Net and other Austin organizations to educate Austinites about the opportunities of the web and give them the tools they need to use it.”

The program known as Unlocking the Connection was launched by HACA at an event in Austin in November 2014, and has served as a model for HUD’s new ConnectHome initiative. HACA will provide advisory support to 27 cities and one tribal nation as they begin to develop locally-driven solutions to bring broadband connectivity to low-income families.

“I am proud that Austin and our housing authority are leading the path to help bridge the digital divide for low-income children, families, seniors and people with disabilities – and that we will now be supporting the efforts of communities across the country,” said Austin Mayor Steve Adler. “Austin is an inclusive and connected community, and that means ensuring that everyone can access technology for job training, health care and education advancement.”

One in four American families still don’t access the Internet at home, particularly lower-income families with children, according to the Census Bureau. For public housing families in Austin, fewer than 30 percent of households own a computer, and only 15 percent have an Internet connection.

Since the launch of Unlocking the Connection, about 80 percent of residents at five of HACA’s 18 public housing properties have registered for free basic Internet service from Google Fiber. More than 40 have completed free computer classes provided by Austin Free-Net, earning free refurbished computers donated by Austin Community College.

“We have been informed by the great work of local communities across the country,” Secretary Castro said during a recent call to action that included mayors from each of the ConnectHome demonstration cities. “The example Austin has set is really going to be a lesson to all of us. They are a fantastic example of a community that is getting this right.”

Although city leaders have made tremendous strides in closing the digital divide in Austin, HACA President and CEO Michael Gerber said there’s still a long way to go, and that his team looks forward to not only sharing what they’ve learned, but also gleaning new ideas and information that will allow the housing authority to ultimately help public housing residents become self sufficient.

“What we find is that human connection is really the change agent for technology adoption,” Gerber said. “No one has a lock on how to do digital inclusion. We’re working to leverage as many partnerships as we can to truly bring opportunity home to our residents.”