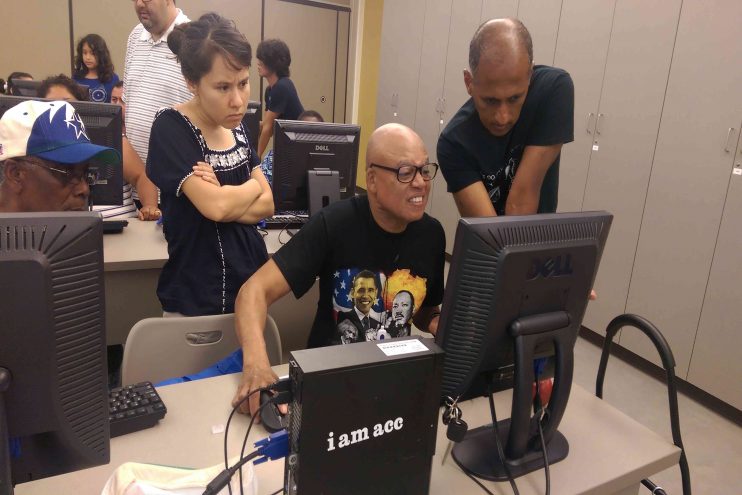 Growing up in Kerala, India, Austin Pathways volunteer Unni Krishnan learned the value of reuse at an early age – and a documentary he saw while studying computer engineering at the University of Texas on sustainability made a strong impression.

“I always question the need to upgrade. I use an old phone with limited capabilities, but it has everything I need,” Krishnan said. “The same is true for almost everyone. If you don’t have the money to buy a $300 computer or a $100 software application, you can be as productive with a reused computer and freely available software tools.”

“We were able to reuse these computers, which otherwise could have gone into a recycling center,” Krishnan said. “The World Possible content helps residents be productive from day one, without having to wait for an Internet connection.”

“We have limited funding for computers, so we called refurbishers all over the world to learn from the best,” said Catherine Crago, who leads strategic initiatives for HACA and Austin Pathways. “World Computer Exchange in Chicago helped us think through how we could use a USB to eliminate the need for a commercial network, allowing us to quickly refurbish computers at scale with little effort.”

Austin Pathways then began working with World Possible to customize the installation 32GB of free educational content and health research on these refurbished devices. Residents can access this information, books, videos and tutorials in Web format even when offline.

“Robin Medina, our Tech Starter instructor at Austin Free-Net modified the curriculum to enable students to train on their new computers, and Norma Fernandez at EveryoneOn, helped us find a copyright-free guidebook so that new computer users could set up and troubleshoot their computers once they got home,” Crago said.

On the day residents receive an earned device, Krishnan leads a three-hour training. He has trained more than 40 residents to date.

Krishnan has helped close the digital divide all over the world. Before volunteering at Austin Pathways, he spent a year as a senior fellow at Meltwater Foundation helping to train the next generation of technology entrepreneurs.

“Open and freely available software does two things: it creates honest citizens and shows people another way to be productive,” Krishnan said. “This pilot is an example of the African concept of ‘Ubuntu,’ the community comes together for the common good.”